Welcome back dear reader friends! Despite the unusual situation in which the whole world finds itself living, let us remember that every cloud has a silver lining, so we should not be discouraged; on the contrary, let’s take advantage of these long days to devote some quality time to ourselves and to let our imaginations run even wilder! If travelling today physically is not an option, I still want to take you with me on a short trip to discover one of the pearls of the Mediterranean, the magnificent Costa Smeralda, in anticipation of being able to organise your own exclusive holiday in Sardinia in the near future.

After reading this paragraph (recommended), try to close your eyes and imagine an oasis surrounded by semi-wild nature sprinkled with coves and inlets of the whitest sand, fascinating rocks sculpted by the wind; the same wind that with its rhythm accompanied by the succession of seasons paints the crystal-clear sea with a thousand shades; imagine as far as the eye can see a Mediterranean scrub with intense perfumes. This is what this little corner of paradise (it only stretches 50 km!) in north-eastern Sardinia looks like.

Now imagine that until the first half of the 20th century, this beautiful area was predominantly uninhabited and considered one of the wildest and most deserted parts of the island. Then, in the mid-1960s, a group of entrepreneurs, under the leadership of Prince Karim Aga Khan IV, imam of the Muslim Ismalite Nizarites, gave birth to the Costa Smeralda Consortium, imagining a paradise for eco-friendly millionaires. The white sandy beaches, golf clubs, private jet and helicopter services and exclusive hotels have helped to attract celebrities, entrepreneurs and wealthy visitors from all over the world to the most famous part of the island, who rarely venture far from their precious villas or their very expensive yachts (most of them docked at the world-famous Porto Cervo Marina).

The absolute centre of the Costa Smeralda is precisely the elegant Porto Cervo, full of gardens, shops, bars and trendy nightclubs. Imagine immersing yourself in the mystery of its megalithic ruins, strolling through the crowded streets during the village festivals celebrating the glories of the past through splendid handicrafts and a very tasty cuisine highlighting local products... Porto Cervo is certainly unanimously considered the capital of the coast and during the summer months it welcomes many tourists who like to gather in the famous Piazzetta delle Chiacchiere or along the Porto Vecchio.

The historical symbol of Porto Cervo is the Stella Maris Church, built in 1968 by architect Michele Busiri Vici in the Mediterranean style, which with its sinuous white walls fits perfectly with the surrounding architecture. The building is in a favourable position with a breathtaking panoramic view that on one side embraces the entire harbour inlet and on the other meets Monte Moro. And, lo and behold, inside the church is keptthe Mater Dolorosa, by the painter El Greco, donated to the church by Baroness Bentinck.

A little anecdote: in the 1977 film 'The Spy Who Loved Me', James Bond drives his Lotus Esprit out to sea: that is the sea of the Costa Smeralda.

I would like to conclude our mini virtual tour with a thought by the Italian writer and humorist Gianni Monduzzi, which in my opinion encapsulates the dreamy and exclusive spirit of this beautiful blue piece of Sardinia: 'I have never been there, but I have been told that it is comfortable: you can ask for the alarm clock at the time you want and, when they call you, fix your clock: the time on the Costa Smeralda is also taken into account at the Greenwich Observatory'. 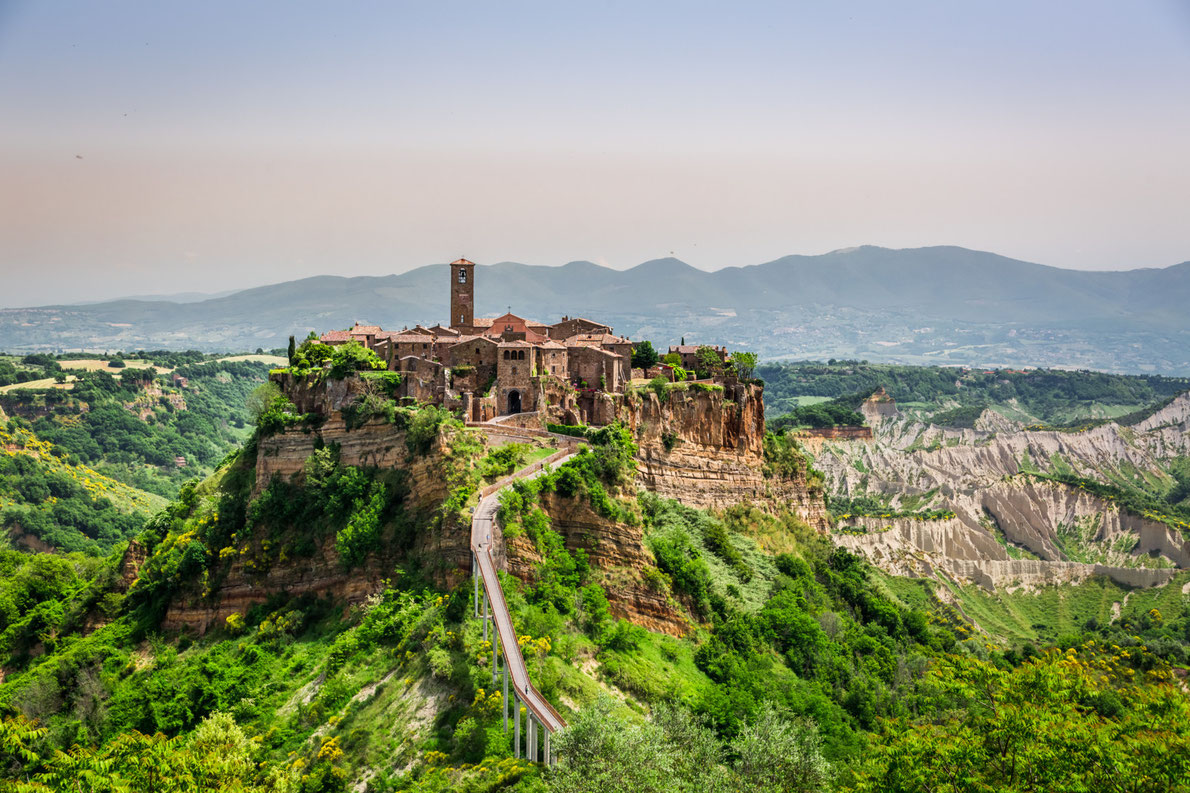 Civita di Bagnoregio is a treasure chest box containing 2500 years of history. It is a small hamlet in the municipality of Bagnoregio, in...