The ancient Italian tradition of ceramics

Thanks to the clay-rich territories in almost every region of Italy, the art of ceramics has always been prominent on our peninsula. This ancient tradition is testified to by the numerous archaeological finds that are still being uncovered today, and these are not just simple crockery, but precious objects of art, grand coverings for buildings and rich, opulent rooms. 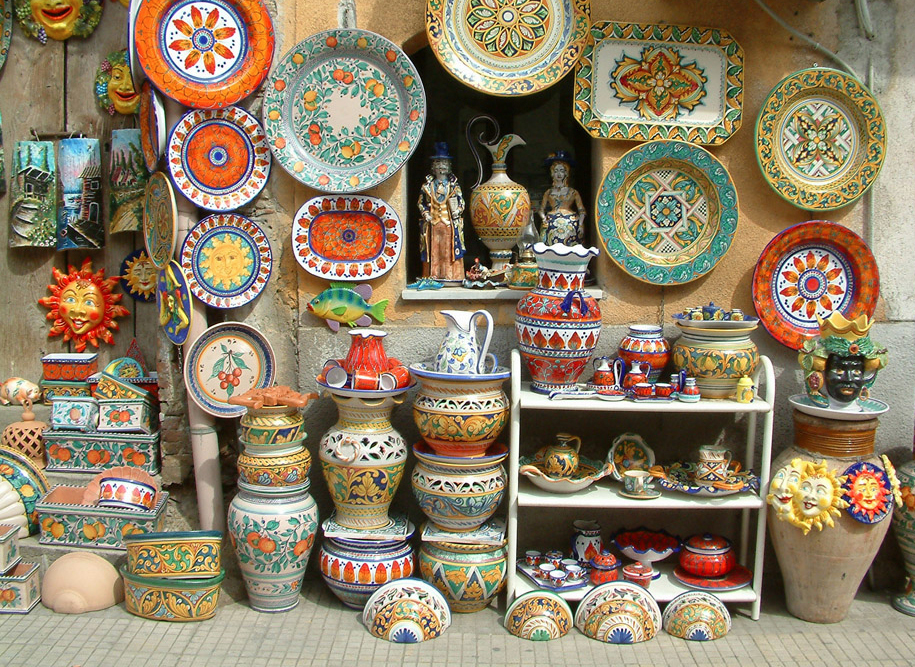 Above all, the Piedmont region is famous for the art of ceramics. In fact, in the towns of Mondovì and Castellamonte, this activity has been developed since the 19th century.
Mondovì is home to the Vecchia Mondovì, a ceramic production of everyday objects with landscapes, fruit, floral elements, geometric decorations and domestic animals rendered by means of rapid strokes and touches of bright colour.
Castellamonte, on the other hand, is famous for its stoves, chimney pots and wall decorations in typical local red terracotta.

In Veneto, the most interesting ceramic production centres are Nove and Bassano del Grappa in the province of Vicenza and Este in the province of Padua.
Ceramics have been produced in Nove for 300 years, thanks to political, economic and environmental factors that favoured its development. The Venetian Republic and the city of Venice, at the beginning of the 18th century, encouraged the production of ceramics to limit imports and favour exports.
The river Brenta was significant for the birth of ceramics: rafts laden with firewood, necessary to fuel the kilns in which ceramics were fired at a temperature of 900-1000 degrees for majolica and 1200 degrees for porcelain, descended from the rivers.

Bassano del Grappa also developed under the rule of the Serenissima as an important manufacturing centre for ceramics, iron, copper, wool and silk weaving and goldsmithing. The production of this period is distinguished by the fineness of the mixture, the richness of the decoration and the brilliance of the enamel.
In addition tothe production of utilitarian objects, artistic production also developed in Este, with the creation of new shapes and colours.
Famous is the cheaper black maiolica produced mainly for convents and the military. In addition to plates, mugs, foghere (small stoves) and ornamental vases, sometimes also decorated with gold, are characteristic.

In Lombardy, on the other hand, the production of Lodi should be emphasised, which saw its golden age for ceramics in the 18th century, perceptible in terracotta ornaments and medieval architecture.

In Liguria, the presence of numerous kilns that once stood on the beaches of Albisola Superiore and Albissola Marina testifies to the success of artistic ceramics.
Not to be missed is the Passeggiata degli Artisti, a unique promenade consisting of a series of more than 20 mosaic panels of coloured glass paste tesserae, which create a walkable path. These works were created between the 1950s and 1960s by some of the best-known artists of the time.

In Tuscany, the ceramic tradition is still flourishing and extensive, especially in the towns of Impruneta and Montelupo Fiorentino.
Tuscan craftsmen also are inspired by Arab productions from Spain, producing objects with Renaissance motifs, Gothic flowers, the eye of the peacock feather and the Persian palmette.

In Emilia, there is the famous International Museum of Ceramics in Faenza, which collects pieces from every era and from all over the world.

In Marche, Ascoli Piceno, Urbania (the ancient Casteldurante) and Pesaro are the centres where ceramic art developed.

In Umbria, the best-known centres are Deruta and Gualdo Tadino. The latter was a commercial centre of great importance in the 15th century. Deruta developed from the middle of the 16th century during a period of peace and economic and cultural growth.

In Abruzzo, the ceramics of Castelli constitute an excellence of which traces can be found above all in the church of S. Giovanni Battista and the small church of San Donato.

Orvieto and Civita Castellana are the most important ceramic centres in Lazio, while in Campania the centres of Cerreto sannita (Benevento) and Vietri sul mare (Salerno). The nearby Cava dei tirreni is also famous to produce wall and floortiles that are exported all over the world.

In Apulia, famous is Laterza, one of the most interesting centres for the production of glazed ceramics and the famous majolica, which differs from the older ceramic productions due to its white coating covered with a glossy varnish.

In Calabria, at Squillace, ceramics probably draw their origins from the productions of Magna Graecia.

In Sicily, the centres of ceramic production are Caltagirone, S. Stefano di Camastra, Sciacca and Burgio, a site rich in clay and wood.

Last but not least is the island of Sardinia, whose towns Oristano and Assemini are the main custodians of the ceramic tradition.
Typical of Oristano ceramics, is the green or yellow colouring; in Assemini (Cagliari), on the other hand, the workshops of the strexiaius (from strexiu, crockery) create everyday crockery with the alkaline clay in which the area is rich.

Pabillonis, also called sa bidda 'e is pingiadas (the village of pots and pans), is also a well-known centre to produce cooking vessels, where household items were made that were famous for their resistance to high temperatures and lightness.